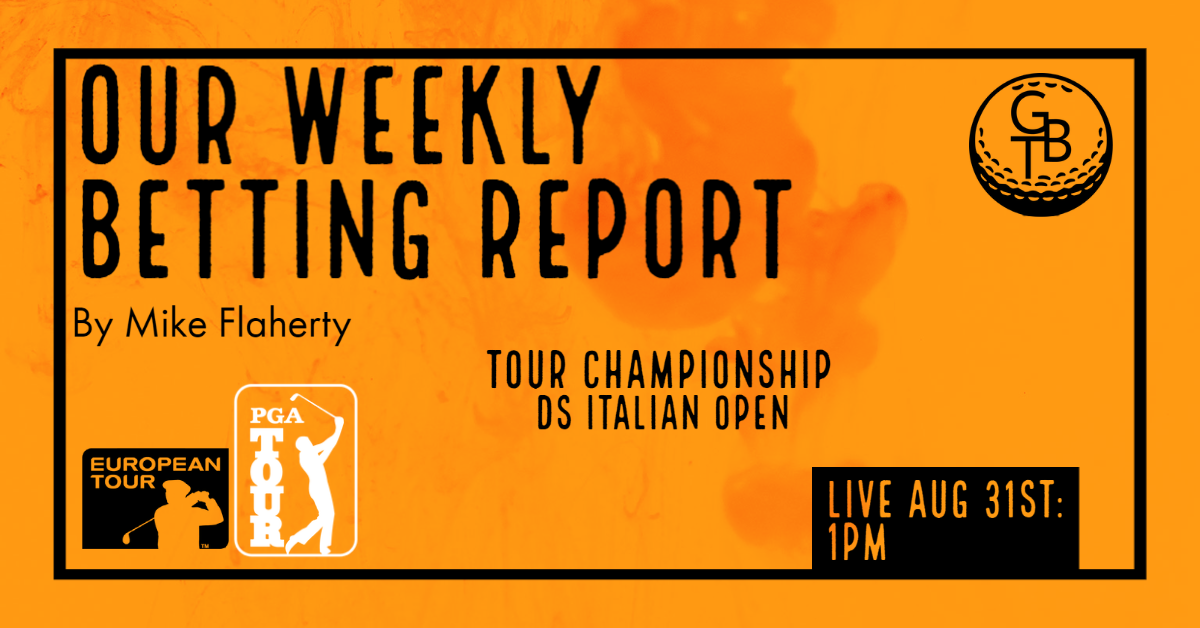 THESE BETS ARE TO WIN THE 72 HOLE EVENT NOT FOR THE TOUR CHAMPIONSHIP WINNER. PLEASE CHECK BEFORE YOU PLACE YOUR BETS. THANKS

Located in Atlanta, Georgia, East Lake Golf Club is the home course of legendary golfer Bobby Jones and is the oldest golf course in the city of Atlanta. The Club is not only historic, but philanthropic as well. Proceeds from operations – more than $20 million to date – support the East Lake Foundation, which has helped transform one of the nation’s worst public housing projects into a thriving community. Since 2005, East Lake has been the permanent home of the TOUR Championship, the culminating event of the PGA TOUR Playoffs for the FedEx Cup, with only the top 30 players on the points list qualifying each year.

Marco Simone Golf and Country Club (also known as Golf Marco Simone) is a golf course in Guidonia, Rome, Italy. It is 10 miles from the city centre of Rome and has 2 golf courses, an 18-hole Championship Course and a 9-hole Resort Course. In 2015 it won the bid to host the 2023 Ryder Cup.

The golf club was named after the castle of Marco Simone. The castle was a Roman fortified manor farm. The tower was built approximately in the year 1000 and later in the Middle Ages additional buildings built around it.

In the 1970s Laura Biagiotti, the Italian high fashion designer, and her husband Gianni Cigna both lived in the restored castle. By 1989 the golf course had been designed and built. The architects were Jim Fazio and David Mezzacane. The golf club was the venue of the 1994 Italian Open, which was won by the Argentinian golfer Eduardo Romero.

The ever consistent Mr JT. There is no reason why he can’t still win both the Tour and this event this week.

He showed some brilliance last week to set himself up. He has been inside the world’s top six since the BMW Championship back in 2019. How good is that?

He came close to winning the Northern Trust a couple of weeks ago. Form is permanent and see another great chance for the win here.

Great to have in your acca again.

For those of you that have followed us over the past couple of years you will know what a banked this guy has been for GBT. So close to winning us the Masters in 2020 at 80/1.

He has proved he has what it takes to win and compete at this level week in week out.

We have played in his groups quite a bit over the past year and feel it is only a matter of time before he bags that win in 2021. He rises to the occasion when on the big stage so there is no bigger event than this week to step up and seal the deal.

The odds I feel are still too low for the 72 hole event but then again I cannot leave him out.

We have tipped Corey twice this year and he has always given us a good run for our money he has been around odds of 25/1 both times and managed a top twenty finish both times.  The bookies have been a bit kinder this week with over 30’s in most places so am liking this bet.

He will win a lot more PGA Tour titles I am sure of it and no better place than here to get his second PGA Tour win.

This course will favour a strong strokes gained off the tee game and he is inside the top ten here this week. In fact his overall game ticks everything good at East Lake, for a horses for courses fit.

If he comes out of the blocks low rounds one or two watch out.

Extra tip added after watching him in practice

No brainer bet for this week in Italy he will be a player on many people’s acca or doubles this week.

His caddy his a great friend and he advised us last week he could have won that event with ease, he is still a bit rusty on the greens but will be coming to a place he likes the look off. We followed him around yesterday in practice and he is always up for a laugh and loves the banter, so we had some side bets and he won most of them.  Winner here back in 2019 and he made a good defence of his title last year with another top twenty finish.

Plenty to like and he if bags the win we will be having a big party in Surbiton for both of them.

Eleven times a winner on the European Tour but it has been over seven years now since his last win which happened to be the US Open back in 2014. I was one of the first to say Martin can’t win again he has been so close over the years but has bottled it on the home stretch. For me it has been a mental part of the game that has stopped him getting over the line since his last win.

For those of you that follow the game, you might know he has been working hard on the mental side of the game for a few years now and I have started to see this paying off over the past few months. I feel he will win again soon.

Third at the Austrian, second at the BMW, have been the stepping stones to this next win and feel coming back here this week where he has managed four top ten’s spanning the past nine years is pretty impressive.

Watch out for a bit of History making this week.

You have to love this guy’s overall attitude to the game such a great playing partner whenever we are paired with him over the years. He knows all of us at the GBT team and always has some great stories to tell us.

We tipped him four times last year and he gave us a good run in every event making the cut in all four but just coming up a little short to squeeze a place or better on the week.

I love the way he is trending right now winner at the Tenerife then went fourth at the Canary Islands and then followed that at the British Masters with a tied sixth place. Plenty to like about how he is striking it right now and feel this course set up will be a dream for him. He can attack this place and should be making lots of birdies.

Loving this price and feel the bookies have this completely wrong so let’s take full advantage.

On the Belfair exchange you can still get as high as 100/1 or some places have him around 66/1 I have gone for Boyle Sports here paying 7 places at 60/1.

We were with his group at the 149TH Open this year and he opening round deserved so much more his 76 could and should have been more like 72 which would have got him through to the weekend easy. So many putts hit the hole and didn’t drop that week so will let him off.

His last playing event was the D+D Czech where again he started slow but improved during the four days to end up in a tie for 12TH place.

He is a seasoned pro and will make the cut here I am sure of it, solid greens in regulation and always straight off the tee will be another great combo here. If he get some luck on the greens we could be cashing in again on Sunday afternoon.