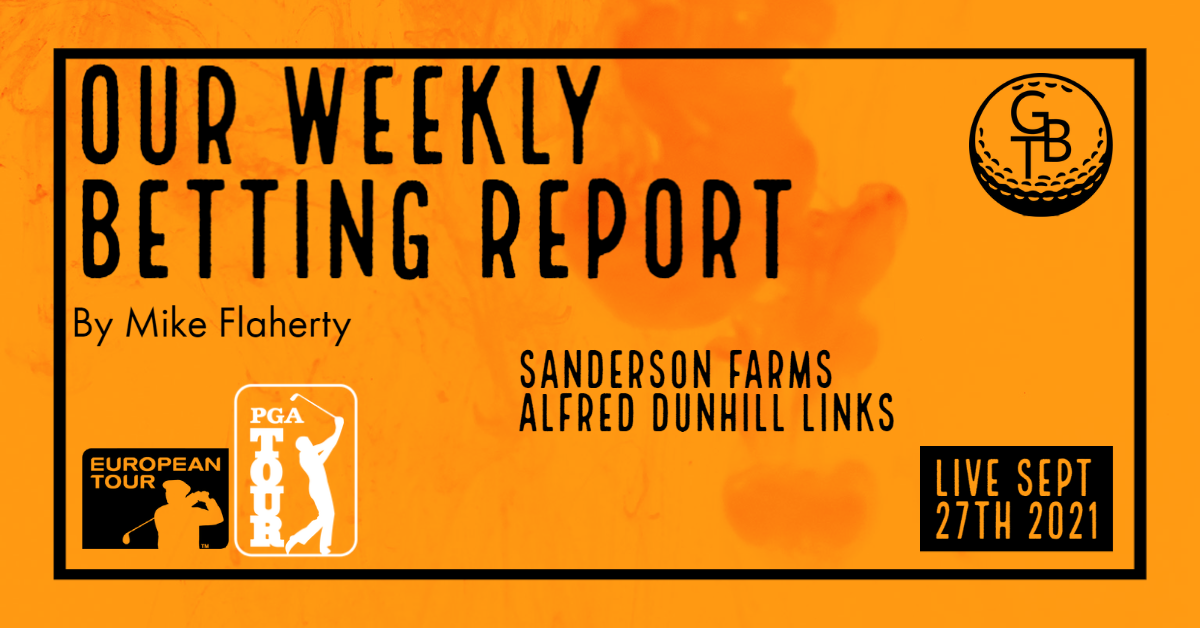 ALL WITH PADDY POWER PAYING 7 PLACES

ALL WITH PADDY POWER PAYING 8 PLACES

The Alfred Dunhill Links Championship is one of the richest golf tournaments on the European Tour. It is played in September, on three different links courses, centred on the “home of golf”, St Andrews in Fife, Scotland.

The tournament is a pro-am, with the format based on the long-running United States PGA Tour’s AT&T Pebble Beach National Pro-Am held annually since 1937, where each team consists of one amateur and one professional. The three course rotation consists of The Old Course at St Andrews, Carnoustie Golf Links and Kingsbarns Golf Links.

The 54-hole cut is made of the top 60 professionals and the leading 20 pro-am teams, regardless of the professional member of the team making the individual cut. These players and teams advance to the final round at St Andrews.

Originally called the Dunhill Links Championship, the event was introduced in 2001 as a replacement for the Alfred Dunhill Cup, a three-man team tournament which became marginalised when the long established World Cup of Golf was given enhanced status as part of the World Golf Championships in 2000, becoming the WGC-World Cup.

The Sanderson Farms Championship is a professional golf tournament on the PGA Tour, played annually in Mississippi. It moved to the Country Club of Jackson in Jackson in autumn 2014, early in the 2015 season.

The Country Club of Jackson opened in 1914. It is a private club with 27 championship holes, 18 of which were re-designed by John Fought in 2008 and measure 7,400 yards from the championship tees. Fought’s layout incorporates classic Donald Ross flavour with parkland style routing with smallish, tricky greens – which range in size from 5,000 to 8,500 square feet.

An interesting fact this week is that the course designer Donald Ross started his career by being an apprentice to the one and only Old Tom Morris at St Andrews in 1899. Which is where the European Tour are this week.

Tapio has been playing really well lately. We caught up with him at the BMW week and he seemed to be enjoying his golf right now and hoping to get his first win on the European Tour under his belt.

He is a very likable guy and this type of format should really suit his style of golf.  His previous two visits here he managed a fourth place in 2018 then another solid top forty finish in 2019.

Known for his good wind play and can fight the ball anyway he wishes with ease will be another plus point here this week for sure.

Normally a slow starter to events so do not be too alarmed if he starts slow.

One of our bankers over the years has been Alex. In fact he was dearly missed at this year’s Ryder Cup could have done with someone who can hole putts for fun. With ten wins under his belt he will be coming into this week as one of the favourites I am sure of it and for good reason.

With a lot of the European players now playing weekly on the PGA Tour he is gaining more experience week in week out. His results have backed this up as well of late:

Like I pointed out he is one of the best putters in the game right now. It won’t be long until he wins his first PGA Tour title that is just a matter of time.  It could be this week ??

If you are after some value this week then Jordan has to be your man. With two top ten’s in his last five starts I feel he is ripe and ready to get us some well-earned profit here.

The 2019 event we saw him grab a very respectable top five finish. In fact there was only a handful of players to shoot all four rounds in the sixties that week and he was one of them.

Two of the most important factors this week will be greens in regulation and a good putting average he holds good numbers for both of these stats. The driver he has been working hard on as they are nowhere near good enough stats to win. The work he has been putting in seems to be paying off and feel around here this could work in his favour as will get away with not hitting a lot of drivers.

Best time for us to play Luke to get some extra odds from the bookmakers. He has gone missed cut at the Wyndham then a couple of poor results at the Northern Trust and the Fortinet. To be fair though we saw a lot of his golf at the Fortinet and he played well just the putts never dropped.

If we take a few of his final events of his 2020 season only a couple of months ago, his game was on fire shooting -16 at the John Deere and then at the Barbasol another top five so it has only been slight margins and for me the greens this week will also help him get to this sort of standard again.

Over his past five events he has dropped between a half a shot to over a shot a hole putting over the field per round. This might not sound a lot but soon adds up over the four days. I feel he has a strong week on the greens much like his performance at the Palmetto.

Talk about an underrated player in 2021 this guy’s golf has been some of the best by any of the world’s top fifty. Some of his best results in 2021 read:

Strong driver of the ball and gives himself plenty of chances to increase his greens in regulation stats every time he tee’s it up.

We witnessed his win over on the Korn Ferry Tour at TPC Sawgrass last year and he looked so at home. Again another player I feel will win a PGA Tour event and this could be that week.

So starting this new PGA Tour season we try and also give you a player that we think fits the bill around here and should fit this track well. For us and the team Kizzire is top of the tree by a long way. He is a Bermuda specialist and a strokes gaining wizard around and on the greens. Another stat was he also loves the resort type courses so yet another box ticked here this week.

Twice a winner on the PGA Tour back in 2018 at the Sony and OHL at Mayakoba. Another thing that stood out for me was the way he seems to play the par three’s in events. This could be yet another positive here this week.

As I advised before he also sits inside the top twenty five for putting on the PGA Tour so could be making quite a few birdies for us this week.